Book Direct with the Owner at Fannie Bay Gaol with Accommodation Australia in Darwin City, for all your Attraction and travel needs.

Opened in 1883, the Fannie Bay Gaol was the major detention centre in Darwin for almost 100 years until 1979, when prisoners were relocated to the new correctional facility located in Berrimah. Now open as an historic site, the integrity of the precinct and the severity of the buildings still convey the oppressive atmosphere for which they were originally intended. The original buildings comprise of cell blocks, a kitchen and wash house, an infirmary, a watch tower, and a 'native section' for Aboriginal prisoners. The infirmary contains the gallows, installed for executions held in the Territory until 1952. 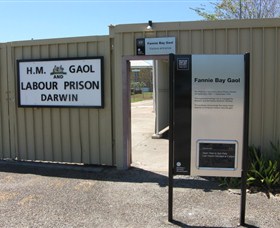 Accommodation Australia welcomes Fannie Bay Gaol in Darwin City NT, we offer an experience that takes you on a journey of a life time in Darwin City. For all your attraction and things to do, book your adventure today.

Is Fannie Bay Gaol in Darwin City your property on Accommodation Australia, please claim your listing and subscribe to update your contact details and receive your phone calls and emails from your clients.