Book Direct with the Owner at Greycliffe Homestead with Accommodation Australia in Biloela, for all your Attraction and travel needs.

Greycliffe Homestead was originally built in the 1870s and constructed of slabs cut with adze and a pitsaw, rafters were crafted from round bush timber and it featured a shingle roof. The homestead was owned by the Nott Family, who, whilst residing in the home along with their seven children, renovated it in the 1920s and the shingled roof replaced by a pyramid shaped iron one. The Greycliffe Homestead was in the Nott family for 100 years, but after the last of the Notts died in 1974, it was apparent that the old homestead could not be sustained in its current location. In 1979, it was relocated by the Banana Shire Historical Society (in two sections) to where it now resides, some 37kilometres away on Gladstone Road in Biloela. Greycliffe has been listed by the National Trust of Queensland as an essential element of the National Estate, worthy of preservation at all costs! As well as the homestead, there is a blacksmith shop, slab kitchen and a shed housing the bullock dray, tip dray. 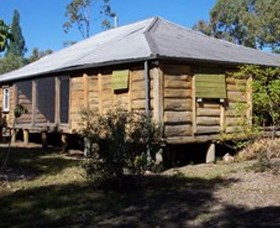 Accommodation Australia welcomes Greycliffe Homestead in Biloela QLD, we offer an experience that takes you on a journey of a life time in Biloela. For all your attraction and things to do, book your adventure today.

Is Greycliffe Homestead in Biloela your property on Accommodation Australia, please claim your listing and subscribe to update your contact details and receive your phone calls and emails from your clients.