About Arkarra Lagoons And Tea Gardens

Book Direct with the Owner at Arkarra Lagoons And Tea Gardens with Accommodation Australia in Hervey Bay, for all your Attraction and travel needs.

Arkarra is an aboriginal word meaning "place of many ducks" and was so named by the local Aboriginal tribe of the Fraser Coast Region. Arkarra's melaleuca wetlands, covering a substantial part of the original 200 acre freehold property, were first identified as "swamp" in 1880. Owned by Hervey Bay pioneer Lars Jacobsen, the property was sold and became a sugar cane, pineapple and small crops with some dairy and beef cattle. During the 1960s with Hervey Bay growing, sand was extracted and sold and used in the laying of waster mains and sewer pipes. Over several years a considerable amount of sand was extracted and huge lagoons dotted with islands were subsequently formed as the excavation holes filled with water. A levee bank was built to prevent surrounding areas draining the lagoons of its precious water, the tracks were raised and today it is a great place to picnic and visit. There are numerous signed tracks and is home to over 170 species of birds, goannas, echidnas, wallabies, and in the water ducks, turtles, eels and fish species survive. 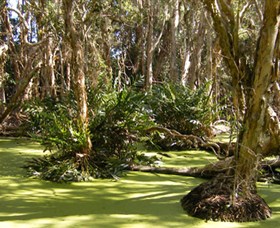 Accommodation Australia welcomes Arkarra Lagoons And Tea Gardens in Hervey Bay QLD, we offer an experience that takes you on a journey of a life time in Hervey Bay. For all your attraction and things to do, book your adventure today.

Is Arkarra Lagoons And Tea Gardens in Hervey Bay your property on Accommodation Australia, please claim your listing and subscribe to update your contact details and receive your phone calls and emails from your clients.