Book Direct with the Owner at Paddy Hannans Statue with Accommodation Australia in Kalgoorlie, for all your Attraction and travel needs.

A familiar sight to visitors of Kalgoorlie is the bronze commemorative statue of Paddy Hannan. Standing proudly in the main street of the gold mining town, you will be able to photograph the statue and then visit the original statue in the town hall. Hannan is credited with discovering the first gold in Kalgoorlie that started the greatest goldrush in Australia's history in the late 1800s. The remarkable sight of the largest goldmine in Australia is best captured from the Super Pit Lookout. Kalgoorlie also forms part of the Golden Quest Discovery Trail, a well planned self-drive tour of the West Australian Goldfields. Drive through the towns of Kalgoorlie, Boulder, Coolgardie and Laverton to see over 25 significant and historic sites. Paddy Hannan's Statue is located in the mining town of Kalgoorlie a seven hour drive northeast of Perth. Alternatively take a two hour flight from Perth. 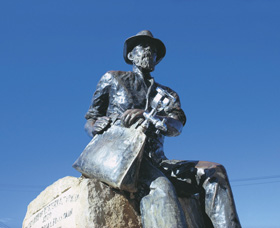 Accommodation Australia welcomes Paddy Hannans Statue in Kalgoorlie WA, we offer an experience that takes you on a journey of a life time in Kalgoorlie. For all your attraction and things to do, book your adventure today.

Is Paddy Hannans Statue in Kalgoorlie your property on Accommodation Australia, please claim your listing and subscribe to update your contact details and receive your phone calls and emails from your clients.